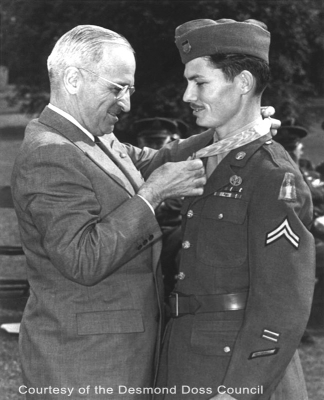 Desmond Doss born in Lynchburg, Virginia, 1919, to William Thomas Doss, a carpenter, and Bertha Oliver Doss. Raised with a fervent belief in the Bible and the Seventh-day Adventist faith, Doss took the Ten Commandments, personally—especially the words, "Thou shalt not kill." He also obeyed the fourth commandment with weekly church attendance, on the seventh day, Saturday.

What: Volunteer For Service In The Army

Why: Doss Refuses To Carry Weapon

Doss' weapons were his Bible and faith in God. His refusal to carry a gun caused fellow soldiers and the army to view him with distain.

Service Before Okinawa: Doss served in combat on the islands of Guam and Leyte. As enemy bullets whizzed past and mortar shells exploded around him, he repeatedly ran to treat a fallen comrade and carry him to safety. By the time Doss reached Okinawa, he had already been awarded two Bronze Stars for valor.

When & Where: Just One More, God

In May 1945, Japanese troops were fiercely defending Okinawa, their remaining barrier. The American's needed to capture the Maeda Escarpment, an imposing rock formation the soldiers called, Hacksaw Ridge. The war was brutal. Many American soldiers lay wounded or dying on Hacksaw Ridge. Doss vowed to rescue as many of the fallen soldiers as he could. As a result at least 75 lives were saved May 5, 1945.

STATS: With 16 million men in uniform during World War II, only 431 received this honor.

Before being discharged from the Army in 1946, Desmond developed tuberculosis. His illness progressed and at the age of 87, Corporal Desmond Thomas Doss died on March 23, 2006. He is buried in the National Cemetery, Chattanooga, Tennessee.