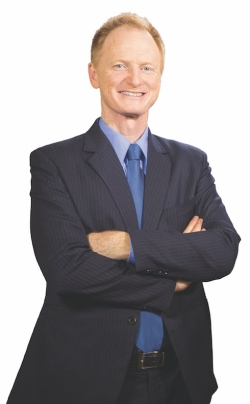 By: John Bradshaw | Speaker, Director,, It Is Written|

More than seventy years ago an unlikely hero saved the lives of dozens of American soldiers in the midst of a hail of enemy gunfire during one of the bloodiest battles of World War II. Now his story has exploded onto movie screens all over the world. It was no,inated for 6 Oscars, and won two.

Hacksaw Ridge is the story of Corporal Desmond Doss, a Seventh-day Adventist combat medic who single-handedly rescued seventy-five soldiers during the Battle of Okinawa. As a result of his bravery he was awarded the Congressional Medal of Honor, the United States' highest military honor.

While Doss' story has been told many times, Hacksaw Ridge is the first feature film to recount his remarkable exploits. The movie is directed by Hollywood heavyweight, Mel Gibson, who having fallen foul of Hollywood and the media on numerous occasions, "may finally have found redemption" according to critics. David Rooney of the Hollywood Reporter has called the film a "forceful comeback," while London's Telegraph newspaper gave the movie a four-star rating. Hacksaw Ridge received a ten-minute standing ovation following its premiere at the Venice Film Festival.

What this means is simply this: it looks like Hacksaw Ridge is going to be huge.

And that matters for Christians, because it now seems likely that millions of people are going to watch Hacksaw Ridge, the powerful story of a war hero. A Christian war hero. A Seventh-day Adventist war hero. And more importantly, people will be talking about Desmond Doss' faith, his beliefs, and the remarkable God who enabled Doss to carry himself with such grace, commitment and bravery.

Unlike the treatment Christianity so often receives at the hands of Hollywood movie makers, Hacksaw Ridge neither downplays Desmond Doss' Christian faith nor minimizes or ridicules his beliefs. Instead, the movie very carefully, respectfully and accurately portrays Doss' faith in God. Doss is presented neither as a fanatic nor as a member of the lunatic fringe. Corporal Doss - a Private First Class at the time of the Battle of Okinawa - is presented as a balanced, Sabbath- keeping, vegetarian, Bible-believing Christian who was moved by faith in God to adhere to his biblical beliefs in the face of overwhelming opposition. Mel Gibson's Hacksaw Ridge is an inspirational story of a Christian's unwavering faith in God.

"Hacksaw Ridge is poised to thrust Seventh-day Adventists into the forefront of the national - and even global - consciousness."

Hacksaw Ridge is poised to thrust Seventh-day Adventists into the forefront of the national - and even global - consciousness. When retired neurosurgeon Dr. Ben Carson ran for the Republican presidential nomination, influential news outlets profiled Seventh-day Adventism and Seventh- Day Adventist beliefs.1 But Desmond Doss' story transcends political lines, even as it transcends religious boundaries. Doss was a man of faith whose story resonates with people from varied walks of life.

You don't have approve of movies, Hollywood or Mel Gibson's liberal use of battlefield violence2 to be enthusiastic about the retelling of the Desmond Doss story. Utilizing the opportunities presented by Hacksaw Ridge can be done without endorsing the movie itself. Your neighbors, colleagues and friends will more than likely watch Hacksaw Ridge even if you do not. Hollywood is presenting Christians everywhere with a multimillion dollar opportunity to come along behind this headline-grabbing movie and speak in favor of the God - and the faith - of Desmond Doss.

Church members will want to be ready to engage in conversations with people who watch Hacksaw Ridge. They will need to be prepared to answer questions from people who want to know more about not only Desmond Doss but about what Desmond Doss believed and what it was that drove him to be steadfast in his faith in God. People will be talking, and believers must be ready to participate in the conversation and provide answers to the inevitable questions.

To assist with the witnessing opportunities presented by Hacksaw Ridge, It Is Written has produced a low-cost, thirty-two page booklet entitled "The Faith of Desmond Doss," which can be ordered from It Is Written for witnessing and mass distribution.

Desmond Doss' prayer is the prayer that should be prayed by Christians everywhere. "Lord, give me one more. Help me get one more!" As the last few sands pass through the hourglass of time, precious opportunities are being presented to reach this world for Christ. While Hacksaw Ridge is not intended to be an evangelism tool, disciples of Christ recognize that witnessing opportunities present themselves in countless ways. Even through Hollywood blockbusters.

Hacksaw Ridge gives believers the opportunity to say to the world, "This is the God we serve. This is faith in action." Following the release of Hacksaw Ridge on November 4 - one week before Veterans' Day - millions of people are going to be introduced to God and Seventh-day Adventism.

It's hard to imagine God has not allowed the production of Hacksaw Ridge specifically for such a time as this. It's positive portrayal of the faith of a Seventh-day Adventist Christian believer provides an unprecedented opportunity to enter into what is likely to be a national conversation tilted toward a church that seldom commands the positive attention of the world.

Desmond Doss now rests beneath a simple grave marker in the Chattanooga (TN) National Cemetery. Ten years after his death Hollywood is telling the story of his battlefield heroism. It's up to those of us still living to tell the story of his Savior, the power of grace and the promise of Jesus' return.

It's almost here. And it's going to be BIG!

2 A writer from the San Francisco Chronicle tweeted that "The battle scenes in #HacksawRidge make the opening scene in Saving Private Ryan look like a Noel Coward play."